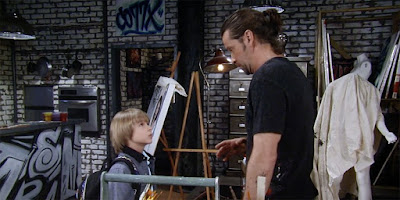 Alexis receives a visit from Nathan at her house. He asks if Alexis knows why there was activity on Julian's credit card. Alexis says it doesn't make sense, because if Julian were on the run he would use cash. Later Alexis goes to see Sam and asks why she didn't tell her about Julian's credit card. Sam says she was worried it would upset her. Then Sam shows Alexis the image of the hooded man by the phone pay. Alexis can't tell if it's Julian or not. Then Sam gets a call from Curtis. He tells Sam that Julian's credit card was stolen by a kid. Meanwhile Nathan speaks with Kristina at the coffee shop about Julian. Nathan wonders if Alexis is holding something back. Back at Alexis's place, we see a hooded stranger break into her house.

Sam and Jason get a visit from Elizabeth. She asks why Sam is allowed in Jake's life if Franco isn't. Jason thinks Sam and Franco are vastly different. Liz thinks Franco is the only one Jake will open up to. Meanwhile Jake goes to see Franco at his art studio. He asks why they can't be friends anymore. Franco let's him in, but calls Jason to tell him Jake is there. Jason and Liz decide to go pick him up. While they wait, Franco talks to Jake about Dr. Andre. Jake tells him that he told Andre in his fairy tale the scarecrow and the witch are friends.

Later Jason and Liz show up to pick Jake up. Jake gets upset with Franco for calling them, but Franco says they make the rules. Liz takes Jake to the car, but Jason stays behind to talk to Franco. They have a tense conversation. Jason accuses Franco of using Jake by making him feel like he's his friend. He insists that Franco stay away from Jake. Franco thinks Jake feels more comfortable with him. Then Liz walks back in to help defuse the tension. She kisses Franco goodbye and then leaves with Jason. After Franco finds Jake's art timeline on his table with new drawings on it. The picture shows a little boy hiding from a scarecrow.

Kristina and Michael run into each other at the coffee shop. He fills her in on Nelle destroying Sonny and Carly's marriage. Michael defends Nelle somewhat, which annoys Kristina. After she tells him that he's Carly and Sonny's best hope. Meanwhile Nelle tells Sonny at his house that she drugged him and they never really slept together. Sonny is disgusted and asks why she's confessing now. Michael shows up and wants to know what happened. Sonny tells him that Nelle drugged him. Then Sonny takes off to tell Carly. Once alone, Michael lays into Nelle for her bad choices. He demands to know why she didn't tell him. Nelle says she was hoping to salvage something between them. Michael says it's too late, he can't fix her and kicks her out.

At Carly's place, she and Jax make out. Jax asks what they're doing. Carly says she doesn't want to stop and leads him upstairs. Then we get a sex music montage. After they have pillow talk and agree their love making was wonderful. They joke that they were using each other and needed it. Jax pushes for more while they have time together. After Carly goes to get wine. Sonny knocks on the door, pushes his way inside and tells Carly he never slept with Nelle.

Have a great night!

Find Me On Social Media